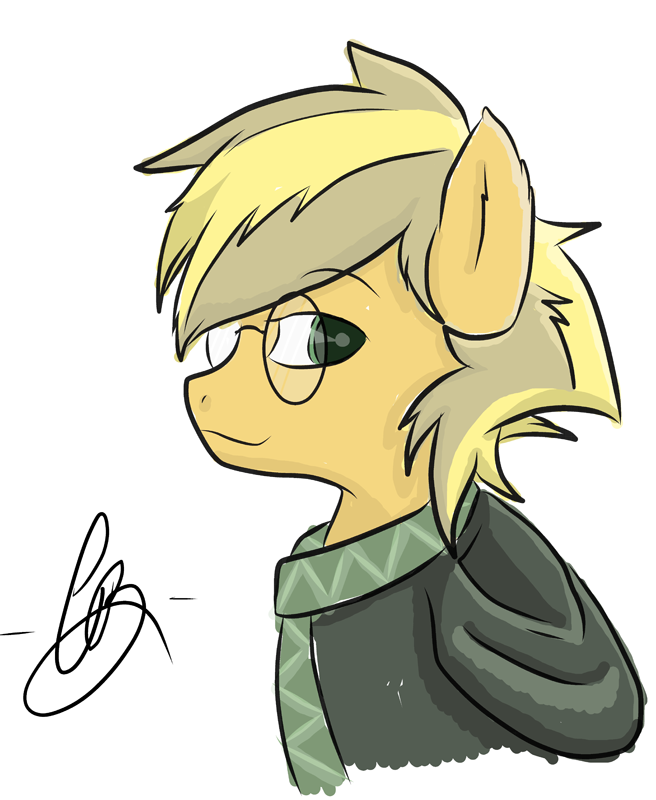 Fav Food: Baked Potato, Fettuccini, Sunflower seeds
Hated Foods: Limes, Pumpkin, Turnip (Do not show Paige turnips! He does not like Turnips or even how they look)
History: Paige used to live on the continent of Neigherland where he grew up. His childhood wasn’t extravagant but he and his family lived in a small home on the countryside; his Father, Mother and brother all lived together happily. Paige’s father was a Knight of Canterlot and had to leave home for long periods of time, but one year he never came home, leaving Paige and his family.
Paige’s mother was left to raise the two colts on her own but she gave all her heart doing so, raising the two young colts with love and care. Paige and his younger brother grew up happily, despite their father’s disappearance.
Paige would often run off into the wilderness which would cause his mother worry, but Paige was curious about the world around him. He loved nature and the sights he got to see just from outside his home; seeing the whole world was his true dream.
During the nights of hardship and loneliness, Paige would tell tales to his younger brother and himself to help coax them along; tales of adventure and magic. It became an important part of their lives, those tales, that they would often play in the fields and imagine the world around them as their faerie tale. With the lively tales and wonder that Paige spun, he eventually discovered his talent: creativity.
When he was old enough, Paige desired to set out and see the world and even write his first novel. Seeing the world would inspire his future book and he even aimed to use the earnings to help his family back home. With what money he had, he set sail across the sea to the mainland of Trottingham where he purchased his cart. It was a small traveling abode that could accompany one pony and a small living quarter, of course, Paige had to pull this cart himself. At first, he wasn’t used to pulling such heavy equipment but as months passed by, he got used to the heavy cart and built physical endurance.
He traveled throughout most of the mainland, stopping in such famous cities like Las Pegasus, Hoofington, Fillydelphia and most importantly, Ponyville. Paige arrived in Ponyville during winter, pulling his cart along with him and was left with no option but to set up residence for a few days since the winter storm kept him from going elsewhere. During his time, he met many different ponies who were welcoming and kind to him; one in particular named Sapphire Night.
During his first night in Ponyville, Paige found himself a long way from his traveling home and the night was setting in. Sapphire Night, an alicorn who owned a Curio, invited him to her abode to take the stray stallion out from the cold and even gifted him with a dark green cloak to help keep him warm. Paige was intrigued by her mysterious nature and quiet demeanor as well as warmed by her hospitality; he formed a quick bond with her before the night was over and said his goodbyes as he went home before the storm grew worse.
He spent many weeks meeting new ponies and seeing great events which inspired material for his novel. Every night, he would come back to his cart and scribble in his book the daily events that he had been through. The friends he made, the lessons he learned and the hardships he overcame; each written with care and thought.
Over the following months, Paige began to see more of Sapphire Night – one such occurrence he began to find himself taken by her selfless nature and gifted her with a mysterious stone that he fashioned into a necklace which she wore humbly; their friendship by this point was a bond stronger than steel.
He now had made Ponyville his new home, having grown comfortable with the ponies around him and the friends he made; it was a paradise for one like him.