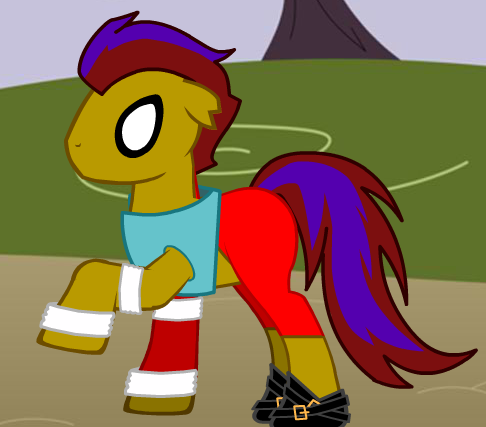 A mysterious pony who's name means "Mystic Saint", Mistico Santo is a completely silent enigma of a pony, constantly clad in a costume and completely mute. This pony may not look like much, but what he lacks in strength, he more than makes up for in agility and the greatest mid-air techniques most earth pony are capable of. This costume-clad colt travels the world, looking for ponies to test his skills. He is nigh-legendary in his home country of Mexicolt for battling with masters of other martial arts, regardless of the disadvantage he would be under.

Mistico Santo comes off as intimidating and perpetually angry, but that's merely because he's unable to socialize very well, especially without his voice. You could talk for hours and all he would do is nod. He likes being solitary, and he's not into conversation, but he could use a friend.

Stats-
Gumption- 2: Mistico is not crazy strong, but he can get a job done.
Quickness- 5: Speed is this pony's greatest attribute, allowing him to move extremely fast and jump off anything to execute great aerial maneuvers.
Excitement- 4: Mistico is highly exciteable. Just the sound of a great fight will get him excited. And his excitement transfers to exuberance in the ring, which transfers that excitement to the audience.
Smartness- 1: Mistico is intelligent, but he's not exactly educated.
Caring- 1: Mistico is not a social pony, and can be extremely awkward in any situation. He can care for ponies, but he's extremely stunted due to his lack of a voice and he's very nearly shy.
Friendship- 1

Cutie Mark: Mistico's cutie mark is unknown, but it grants rerolls on failed Quickness checks when it involves fighting and wrestling.