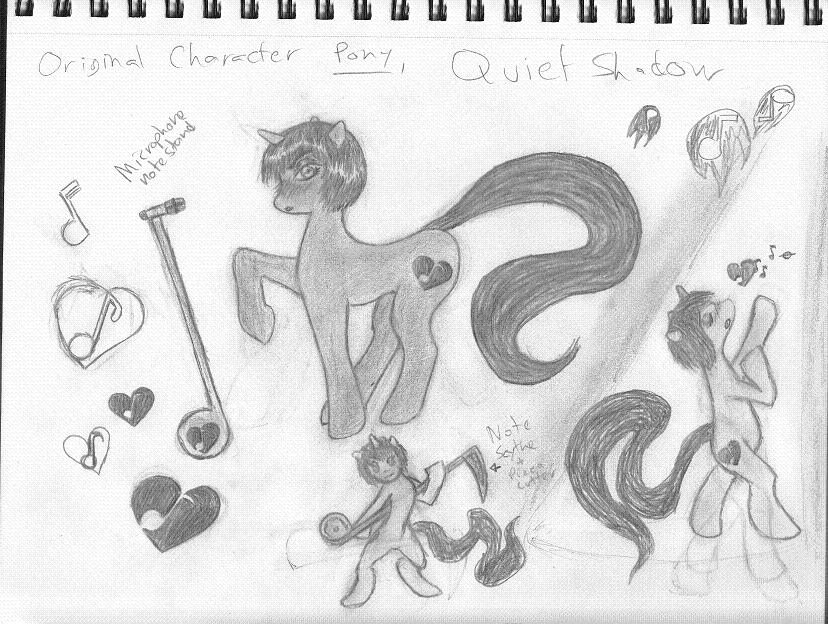 QuietShadow or Quai for short.

Her build is tall and lean, much like most of her family. This comes from years of training and conditioning. However, she doesn't keep up with her physical training as well as her cousin, considering her specialty.

Her hair is stark black, and she keeps it in a bob cut. Her tail is very long, and shadowy. Like abnormally long. Her coat color is gray, and her eyes are stark yellow, much like her cousin.

The mare who took in SilentShadow went on to meet a certain stallion and fell in love with him. Their union bore a beautiful daughter whom they named QuietShadow. The mare and her husband raised both Silent and Quiet together as one big happy family.

Also, they trained their children in the Shadow Strike Style.

QuietShadow was actually not adequately named. Ironically, she is actually quite outgoing and loud spoken. She is actually quite rude and has the nasty habit of sucking her teeth to make a smacking 'Che' sound when irritated. She is easily irritated, has a short temper, and it quite prideful.

Her super special talent is her proficiency with a special set of techniques within the Shadow Strike Style that involves magical music. She can sing certain spells and chants that have different effects. Mainly, her songs are best at raising the abilities of her allies, or weakening enemies. Her vast library of songs allows her to help almost any pony in any given situation, however she can only sing one song at a time. Regardless, the versatility of her helpfulness has made her quite the successful Monster Hunter with in the business. Her schedule is often filled with high profile jobs. Needless to say, she is much more successful than her brother and cousin.

Her Cutie Mark is a gray musical note shrouded in a dark aura that is shaped as a black heart. The grey of the note matches her coat. So it looks like a broken black heart, with the note part missing. Associated Stat: Excitement.
She is easily excitable, as in irritable. Her bad temper fuels her magical abilities.
Alternatively, she only really gets excited when she is fighting for her family.
Her mark represents her expertise with the Song Shadow techniques within the Shadow Strike Style of her family, and her general ability to sing. Her specialty are songs that relate to heart break.

Her adoptive brother is SilentShadow.

Her cousin... her distant... distant cousin is KindShadow.

She be kissing up on Axl every now and then.