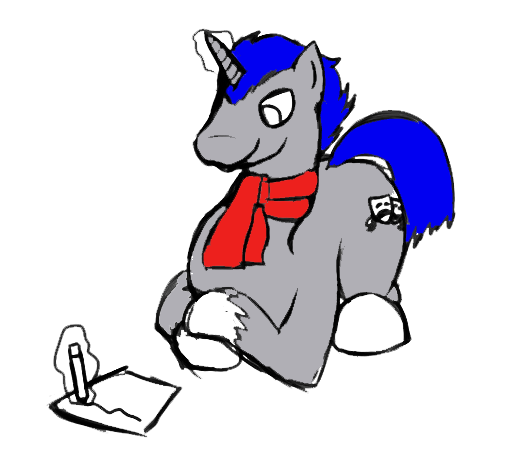 Age - 24, Birthday - Jan 18
Full Name - Show Time, though he vastly prefers to be called Showtime, as Show by itself, as he put it, "Is a ridiculously stupid name." His sister Jacklyn is literally the only pony who he will let use that name.
Note: Thanks to Sali for the new profile pic!
Theme Song: The Broken Clock

Showtime is a somewhat large Unicorn with a Grey coat and Blue mane, his Cutie Mark being the Masks of Comedy and Tragedy. A somewhat introverted Pony, he tends to treat new faces with a distance to hide his shyness, but once he becomes acquainted he is noted to be quite friendly, if sarcastic and reclusive. In addition to his love for the performing arts, he enjoys reading and has a second love for music, although it has been some time since he has picked up an instrument.

An aspiring actor of sorts, Showtime dreams of the day that he could possibly show up on the silver screen or the grandest stages of Equestria. However, his quite demeanor has prevented him from auditioning for anything and his experience on the stage is limited to being a simple stage hand. In addition, his first impressions tend to not be very good due to his somewhat quite and hostile demeanor upon first meetings. However, his friends have noted that beneath that soft-spoken demeanor is a pony of exceptional talent.

His introduction to the acting world was through some local shows, until he managed to get picked up by a traveling troupe. Due to the fact that it could interfere with the shows, Unicorns who were not actually in the performances were forbidden from practicing magic. As a result, he is rather magically stunted, although his physical strength is far above most other Unicorns, also partially due to his Earth Pony heritage. Now that the troupe is disbanded due to financial troubles, he slowly building up his magical abilities.

After saving some money, Showtime decided to travel Equestria, hoping that his experience will enable him to break out of his shell and live his dream. Or at the very least start up and run a theater of his own (As he's found that, while he suffers a severe case of stage fright, he knows the ins and outs of running a show better than anypony). Lately, his travels have lead him to Ponyville, a seemingly quite town where he could possibly settle down for a while.

Or at least, that's the abridged version of his history, anyway.

His family history is a bit complicated, as he is something of a black sheep amongst them. His mother's side was comprised of a line of unicorns that were fairly gifted with magic, and were supposedly involved with the development of a unusual theory of magic involving the alignment of planets until all research into it apparently halted for some reason. His family apparently continued the research on their own, with his grandfather Archer Krona the latest in the line. However, when his only child turned out to be an earth pony rather than a unicorn his grandfather was left without an apprentice until Showtime was born, who was taken under his (then obsessed and quite senile) grandfather's wing as his magic student. However, almost all of their lessons would be spent on his grandfather's theories rather than traditional magic, so even if Showtime could use magic properly today it would lack a great deal of control, as almost all of it would have been self taught. His grandfather's obsession had also turned him off to the idea of magic in general, and holds quite a bit of bitterness towards him. He has recently found out that his grandfather had locked most of his theories away in the back of his mind, and is currently trying to unlock them both so he can give them to a unicorn better suited for researching them, and to get the last shadow of his grandfather off of his back.

His father's side is a respected line of clock makers, his Great Grandfather in particular well known for his craftsmanship. While Showtime never took much interest in the profession, he knows a bit about clockwork and can do at least minor repairs. Very useful for the acting troupe whenever their clock's started not working. He is, however, somewhat estranged from them as they didn't approve of him getting into theater initially and told him that joining the troupe would result in him losing his inheritance. However, they eventually got over it and they now exchange letters whenever Showtime is in a town for an extended period of time, with his sister Jacklyn Time currently learning the trade of the craft.

One of his most prized possessions is a scarf given to him by a mare he fancied in the troupe. While he was unable to ultimately get the girl, he holds onto it dearly, and wears it constantly. It is the last memento from his days in the world of theater... for now. Unfortunately, due to constant travel and wear and tear he had to retire it, though he still has the scarf hidden away somewhere. He now wears one made for him by RainbowQuill.

He is now the Stage Manager for baby Baby_Boo's new studio! Huzzah! However, he has to wait for the actual facilities to be built before he gets to work. Scratch that. He's now working for MojitoJoe until further notice as Jester's assistant.

Update: Until Jester returns from his business in Canterlot, Showtime will temporarily be serving as Acting First of House Regulus. However, this is, for the moment, not common knowledge, so the most ponies should suspect is that he is just taking over some of his minor duties while Jester is away.

He has now unlocked his grandfather's seal! Yay! ... He just now needs to find a unicorn to hand his notes over too...

Update: Thanks to his Hearth's Warming gift from Archie and about a week of constant drilling, his magic in regards to theater related spells are now up to snuff!

AgileFlourish: There may be prospective for a relationship here. Yay~

ArcaneScholar: First friend he made in Ponyville, actually.

Grapple: He's... not entirely sure how he got to be friends with her, actually. She just started talking to him one day.

Iona: Introduced him to Boo and is pretty much the entire reason he'd even be in the running for having a job at this point.

Kelpy_Blue: She's a sea pony. She's adorable. What other reason do you need?

KiteCres: He'd like to think Kite is his best friend in ponyville. At the very least he's the one he's talked to the most.

MojitoJoe: Showtime's current employer until he's sure what the situation with Baby Boo is.

Moon_Star: He likes Moon. She's the sort of pony he'd look out for.

OrionShadow: Has had a friendly chat with him every now and then.

Limited Magic: Any magical spell outside of telekinesis and theater related spells must be done with his grandfather's magical theory. However, due to it's unstable nature, it is just as likely to explode in his face as it is to work. Roll 1d20 whenever using a spell outside of telekinesis. If it lands on an odd number, the spell fails and Showtime suffers 1 hp of damage.

Gumption: 5 His work as a stagehand has resulted in him being physically fit and healthy. He is also noted to have a very hefty kick when angered.

Quickness: 2 While his work as a stage has resulted in him being somewhat fast on his feet, he tends be rather slow outside of work.

Excitement: 2 While he has above-average endurance, he is noted to be extremely calm most of the time. This just causes the times where he does get excited to be even more jarring.

Smartness: 3 An intelligent pony, though he has tendency to be a bit too clever by half and overestimate his abilities.

Caring: 1 He's relatively new in town, so he doesn't have many emotional attachments to anypony in town at the moment.

HP: 7 MP: 4
Cutie Mark: Showtime's Cutie Mark depicts the Masks of Comedy and Tragedy, representing his love for the performing arts. It enables him to make a saving throw for all speech checks.

ArcaneScholar - A set magical tomes and encyclopedias to help with his studies. And a sombrero. Just because. He doesn't know why either.