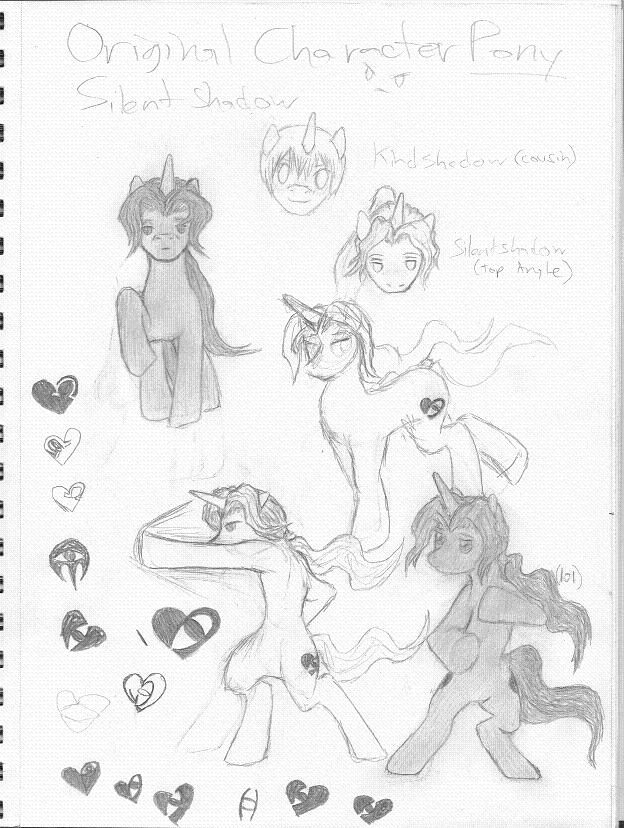 SilentShadow is a male adult Unicorn. His coat color is gray and his mane is black. His mane is long and usually kept in a pony tail (lol). His tail matches his mane in color, length, and style. His eyes are black. His build is long and lanky, but fit. His build is more akin to a runner, rather than a bodybuilder. He has also been trained in the Shadow Strike Style, much like KindShadow is, however he has a distinctly different focus. He is more proficient with magic.

His cutie-mark is an eye shrouded with an black aura. The aura is shaped like a heart. It represents his skill in magic, specifically the Shadow Silence spell.

SilentShadow is KindShadow's relative in spirit, but not by blood. He was adopted into the Shadow family when he was very young colt.

SilentShadow's adoptive mother was a young mare who was already well trained in the family buisness. She was a Monster Hunter and a good one. She was hunting a manticore, when she met a young unicorn in the woods. The colt was not injured, but it was odd that he was alone. The unicorn would not answer her, no matter what she asked. He did however, respond to her directions. So she took him in, thinking it would be temporary at first.

Using her Monster Hunting skills, she tracked the way he had gone through the woods, and found his campsite. She didn't have to be a trained Monster Hunter to know that a very large creature had been there. The campsite was a wreck. There was no sign that anypony was hurt, but the colt's parents were no where to be found.

Again using her tracking skills, she deduced that three ponies, one of them just a foal, had fled from the campsite. They had fled together, at first but where quickly seperated. Unfortuneately, she lost their tracks before finding them or any clues to what happened to them.

She took him into the nearest city, and brought him to the local Inn, where he was allowed to stay until his parents were located. She checked back in with him every now and then, for the next few months, but his parents never reunited with him. Additionally, he never spoke a word to any pony.

After capturing and relocating the Manticore, she decided to check back one last time. His parents still had not found him. She wouldn't be able to visit with him, after this, because her next job called for her to travel very far. He seemed to be happiest arond her, and become even more despondant when she wasn't around, according to the mayor's aid. So she decided to adopt the silent colt. She didn't know his real name, so she gave him the family name, and the surname, Silent.

He seemed to respond positively to the name SilentShadow, most likelly because it sounded awesome.She trained him in the family buisness, mainly to help him work past his child hood trauma. He is now a very strong and confident Pegasus, though to this date he does not speak very much, or even at all. He does possess the ability to speak, however. Even though he doesn't speak, some close to him can somehow understand him through very subtle changes in his mostly stoic expressions and body language.

He has grown into his role of Monster Hunter quite well. He doesn't enjoy hurting creatures, but knows that he can protect ponies with his strength and that the job is a necessary one.

His adoptive sister is QuietShadow.

He hearts Fable, very much so.